Sinfonietta in the choreography

Boris Tchaikovsky didn't compose the music for the ballets. But in his music (especially in the incidental) there are many "dance" pieces and motifs...
Relatively recently the idea to embody the one and the same Boris Tchaikovsky work (the well-known Sinfonietta) by the choreographic means was realized in the U.S.A. and Russia by two choreographers...
Sinfonietta for Strings (1953) is among the sublime achievements of Boris Tchaikovsky in the 1950s.  The composer himself, musing on what in his opinion was a distinctive feature of good music, said, “You can tell at one where and when it was written.” Paradoxically, the Sinfonietta may have proved this thesis. This music, written in the spring of 1953, soon after Stalin’s death, indicated the start of new times in the social and artistic life, due to its purity and absolute escape from any political time-serving whatsoever. The Sinfonietta is one of Boris Tchaikovsky’s works that has won recognition worldwide. For instance, British reviewer Martin Anderson (Fanfare, January-February 2005) believes that, “To my mind, the Boris Tchaikovsky Sinfonietta is one of the finest works for string orchestra anyone ever composed.” All the movements of the Sinfonietta are utmostly simple and clear in their style. Fearing no reproach with conservatism, the composer uses structures well- known to everyone – Sonatina, Variations, and Rondo. But these familiar structures seem first discovered when filled with really original, live, and elusively beautiful musical material. The use of string orchestra in the Sinfonietta is quite traditional and far from experimental. Still, the very musical ideas of the composition are in such a fusion with their timbral implementation that their orchestration appears as always novel and the only possible one. Understandably, the composer said in an interview, “In Sinfonietta for Strings I almost did not work at piano reduction; I started writing drafts, then gave it up, and proceeded to writing the score straight away.”
Chronologically the first idea to stage Sinfonietta in ballet was realized in 2009 by San Franciso Ballet with the choreographer Yuri Possokhov. But the appearance of this ballet version have a background. In 2006 about his old idea to make the ballet version of Sinfonietta told me Yuri Borisov (1956-2007), Russian musical theater director, who was the sincere admirer of Boris Tchaikovsky's music. To the truth, when I heard from Yuri Borisov this idea, I was very astonished: it was very unusual for me. But when imagined it, I thought: "Why not?!"... Unfortunately, in next 2007 Yuri Borisov suddenly passed away, and I thought the idea is vanished...
But at the late 2008 I read the announcement about staging of "Diving into the Lilacs" (this is the name of San Francisco version) in early 2009. The performance had a success, and it was repeated in 2010.
I didn't see the full version of the "Diving...", and I can't have a full impression about it. Here is the extract from that ballet:
http://www.youtube.com/watch?v=8LeZf6iohpA
That events were very important for promotion of Boris Tchaikovsky music in the U.S.A.
In 2010 the "all-Russian" version of ballet Sinfonietta appeared - in the project "Terra Musica" (took place in International House of Music in Moscow), head by Yuri Abdokov, famous Russian composer and mentor. The new version was created by young choreographer and dancer Kirill Radev. Here are the extracts from this version:
Rondo: http://www.youtube.com/watch?v=BF3JaL-vnMY&feature=channel
Variations: http://www.youtube.com/watch?v=WxfzNYGt_HU&feature=channel
This event was highly acclaimed by Russian media, and after decision of The Boris Tchaikovsky Board, Kirill Radev was awarded by The Boris Tchaikovsky Award.
I hope, in future we will see again staged the both version of ballet Sinfonietta.
I.P.
Автор: Igor Prokhorov (admin) на 13:21 No comments:

Premiere performance of the Second Symphony on the CD!

Early this year the CD with the premiere performance of the Second Symphony (coupled with the piano pieces performed by composer himself) came from Profil Medien Edition Guenter Haenssler (PH 10038): 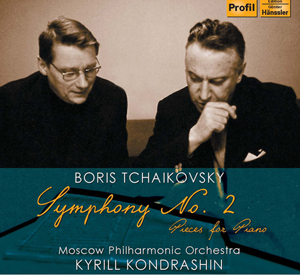 The recording of Theme and 8 Variations is the same recording as on the CD issued by the same label in 1999 (CR 991064).
The recordings of Weinberg's 6th Symphony and Szymanowski's 3rd Symphony (made on the concert 25 January 2010.

The article by Paul Ingram Getting to know Boris Tchaikovsky was published in Fanfare (May/June 2009). To read please, follow the link.
Автор: Igor Prokhorov (admin) на 22:00 No comments:

Email ThisBlogThis!Share to TwitterShare to FacebookShare to Pinterest
We started the blog to provide more information about the news and events related with the Boris Tchaikovsky's music.
Автор: Igor Prokhorov (admin) на 17:04 No comments: