Boris Tchaikovsky passed away 15 years ago... 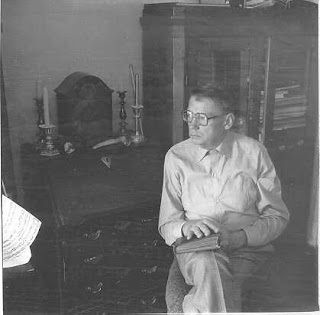 On February 7, 1996, the great composer Boris Tchaikovsky passed away.
15 years is almost nothing comparing with the eternity. But it is quite a large time for the human. During such tume quite possible to understand this or that true.
In the past seven years almost all composer's work have been released on the CDs. We can definitely say that music of Boris Tchaikovsky became more and more neccessary for people. We see the great interest to this bright and deep music.
If you look into the list of concerts taken place in 2009-2010 and the schedule of the concert for 2011 - you can notice that the music of Boris Tchaikovsky was performed and will be performed in different parts of the World: in Russia, U.K., U.S.A., Ireland, Germany, Brasil, Lithuania, Italy, Belgium, France, Hong Kong...

We are sure that time of this eternal music came, and Boris Tchaikovsky already took his place in the musical history among his predessesors: Dmitry Shostakovich, Nikolay Miaskovsky, Vissarion Shebalin, Anatoly Lyadov, Sergey Taneyev, Nikolay Rimsky-Korsakov, Pyotr Tchaikovsky.

And I completey agree with Mstislav Rostropovich, who wrote about Boris Tchaikovsky: "...I consider him to be a genius, whose contribution to the cello repertoire has yet to be sufficiently appreciated. Boris's modest nature would prevent him from ever showing off or advertising himself, and I do not think that sharing a surname with the illustrious Pyotr has helped him either. Nevertheless, I do think that one day people will come to know that two great Russian composers bore the same name…".